null The New Kid on the Street
Precision in Practice

The New Kid on the Street 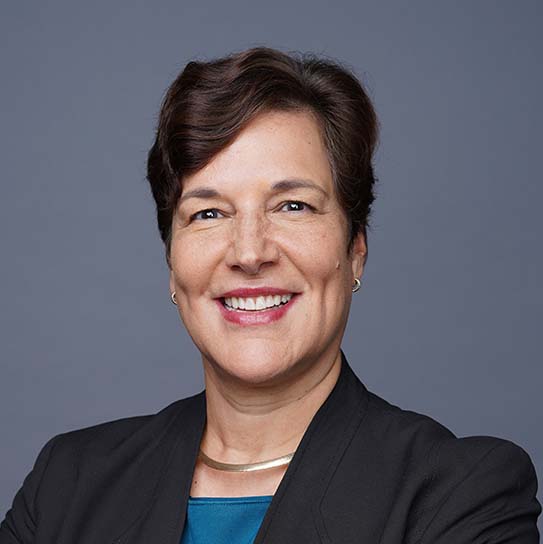 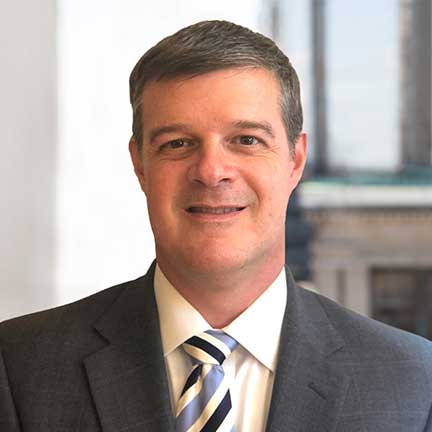 With decades of index portfolio management, we know that awareness of benchmark methodology is a crucial ingredient in our success. In September, we reviewed the possibility of Tesla’s addition to the S&P 500® Index ahead of its scheduled rebalance for the third quarter of 2020. Since S&P Dow Jones (S&PDJ) index inclusion criteria comprises both quantitative and qualitative criteria, we sought to clarify the key issues that might drive its decision-making process.

At the time, we noted that Tesla’s second-quarter earnings satisfied the benchmark provider’s quantitative requirements for inclusion with positive GAAP earnings in the most recent quarter and the sum of the last four quarters. However, we also reviewed the more subjective, qualitative considerations that seem to matter as much as, and possibly more, to decision makers at S&PDJ. We expressed some concern about Tesla’s inclusion prospects in September. It did not come as a surprise to us when S&PDJ decided to add Catalent, Etsy and Teradyne instead of Tesla. At the time of S&PDJ’s September index inclusion announcement, the combined market capitalization of these three companies totaled $40 billion, well shy of Tesla’s (then) $310 billion.i

As has been widely covered, on November 16, S&PDJ announced plans to include Tesla in its December index rebalance effective December 21, replacing a company or companies to be named after market hours on December 11. What criteria changed between Tesla’s second- and third-quarter results to merit inclusion now?

We think one of the key concerns about the quality of Tesla’s earnings has been the reliance on non-core revenue, chiefly the sale of emission credits to other automakers. For the second quarter of 2020, Tesla recorded the sale of $428 million of these credits against net income of only $104 million. However, for the third quarter of 2020, Tesla’s sales of emission credits fell by 7% to $397 million, while net income rose to $331 million. On a quarter-over-quarter basis, Tesla’s revenue from car sales expanded by 47%. Given the shift in income toward Tesla’s core business, it appears that the company finally passed S&PDJ’s remaining qualitative hurdles for addition to the S&P 500 index, setting the stage for a wave of rebalancing.

When it is added, Tesla will be one of the largest additions to the S&P 500 Index in the past decade, rank within the top 15 names in the Index by weight, and be one of the largest consumer discretionary stocks in the benchmark. At the time of its announcement, S&PDJ estimated that Tesla’s pro-forma weight in the S&P 500 would be approximately 1% and would require a funding trade of $51 billion (based on indexed assets of $4.6 trillion managed to the benchmark).

Due its significant size, S&PDJ immediately sought feedback from members of the investment community for recommendations on implementing Tesla’s addition to the S&P 500. On November 30, S&PDJ announced its decision to add Tesla to the S&P 500 in one step at its full float-adjusted market capitalization weight effective prior to the open of trading on Monday, December 21, 2020.

Below we show how various price movements from Tesla’s closing price of $641.76 on December 7 could potentially impact the company’s weight in the benchmark on the date of inclusion. In short, the larger the price change, the larger the index weight, and the greater the funding requirement will be, driving smaller companies out the benchmark to make room. Conversely, the smaller the price change, the smaller the index weight, and the smaller the funding requirement will be. 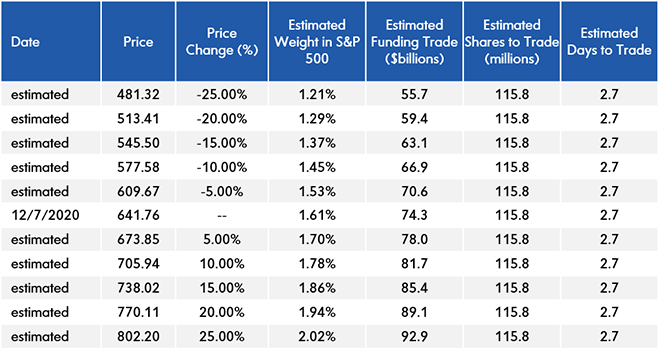 As a trusted index manager of our client’s assets, we will be welcoming Tesla into the S&P 500 Index. Not to spoil the celebration, but we can’t help noting that the S&P 500 is a little late to the party as Tesla is already a longstanding member in other US Large Cap benchmarks, which means those benchmarks have already benefited from Tesla’s significant market appreciation in 2020. Which raises the question—is Tesla the only such large cap company missing given the S&PDJ inclusion rules?

Mellon Investments Corporation (“Mellon”) is a registered investment advisor and subsidiary of The Bank of New York Mellon Corporation (“BNY Mellon”). Any statements of opinion constitute only current opinions of Mellon, which are subject to change and which Mellon does not undertake to update. This publication or any portion thereof may not be copied or distributed without prior written approval from the firm. Statements are correct as of the date of the material only. This document may not be used for the purpose of an offer or solicitation in any jurisdiction or in any circumstances in which such offer or solicitation is unlawful or not authorized. The information in this publication is for general information only and is not intended to provide specific investment advice or recommendations for any purchase or sale of any specific security. Some information contained herein has been obtained from third party sources that are believed to be reliable, but the information has not been independently verified by Mellon. Mellon makes no representations as to the accuracy or the completeness of such information. No investment strategy or risk management technique can guarantee returns or eliminate risk in any market environment and past performance is no indication of future performance. The indices referred to herein are used for comparative and informational purposes only and have been selected because they are generally considered to be representative of certain markets.  Comparisons to indices as benchmarks have limitations because indices have volatility and other material characteristics that may differ from the portfolio, investment or hedge to which they are compared. The providers of the indices referred to herein are not affiliated with Mellon, do not endorse, sponsor, sell or promote the investment strategies or products mentioned herein and they make no representation regarding the advisability of investing in the products and strategies described herein. Please see mellon.com for important index licensing information. CFA® and Chartered Financial Analyst® are registered trademarks owned by CFA Institute.

One for the Record Books 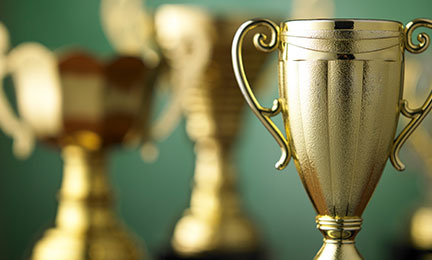 The New Kid in Town