The Price of Tightening

We fear inflation has plateaued, not peaked. Feeding into cost pressures are the catch-up in business costs as people attempt to recoup lost purchasing power, the need for firms to pay-up for scarce workers, and the creep-up of the public’s inflation expectations, which becomes embedded into cost and price pressures. Fed officials must do something hard: Raise the policy rate to tighten financial conditions to slow the growth of aggregate demand to bring it into better alignment with the level of aggregate supply. Only then can inflation be brought down.

For now, there is a mutual suspension of disbelief among officials and market participants of the old, hard logic of the business cycle. Good news is good; bad news has the silver lining of foretelling a rebound. The result follows the storyline that the Fed will hew to its established policy path, slowing the growth of aggregate demand, perhaps at the risk of a shallow recession next year with few untoward consequences, and successfully return inflation to its longer-term goal. However, we believe this confidence is difficult to square with circumstances. In its latest Summary of Economic Projections, the Fed forecasts inflation to fall over the next year even as the policy rate remains negative in real terms and the unemployment rate runs below its own assessment of its natural rate. This belief in immaculate disinflation limits both the necessary projected hikes in the policy rate and adverse fallout to economic activity. It hinges on forces materializing—increased aggregate supply as people return to the labor force and global supply chains mend—that failed to materialize last Fall when the Fed was similarly optimistic about imminent disinflation working from a lower base inflation rate. In our view, the latest Fed guidance represents a lower bound on the extent of eventual policy firming because inflation will persist at a higher level for longer than officials hope.

Against that backdrop, shorter-maturity yields will likely rise further, increasing the attractiveness of cash in portfolios. Longer-term sovereign yields are likely to rise as reality sinks in. The reality, a more persistent inflation problem and a firmer Fed, will likely push up breakeven inflation rates as measured by the difference between nominal and index-linked Treasury yields. For investors, the revision to their outlook will be associated with financial price volatility remaining elevated, which should extend the climb in term premiums. As many advanced economies teeter into recession, concerns about household, business and some sovereign balance sheets should intensify, implying that sovereign and corporate spreads widen, especially those of emerging market economies.

Equity prices, in particular, appear rife for a correction of the rally associated with the shared misperception of Fed officials and investors about economic prospects. We believe economic growth will slow more considerably than expected, which will hit corporate earnings hard. Actual and expected earnings will be discounted at higher market rates as the Fed tightens more aggressively than expected now. Put together, weaker earnings and a higher discount rate will challenge current equity valuations. 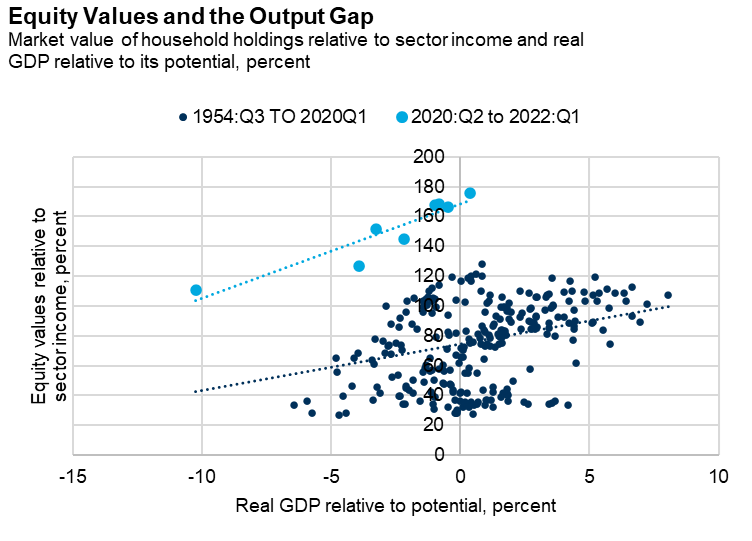 Source: Household holdings of corporate equites relative to sector income, Financial Accounts of the US (Federal Reserve) and real GDP (Bureau of Economic Analysis) relative to its potential (Congressional Budget Office), all accessed via FRED, 8/13/22.

The chart at the above captures our concern about equity prices by plotting the value of corporate equities held by US households relative to their income on the vertical axis versus a measure of the aggregate strain on resources, the real GDP gap as assessed by the Congressional Budget Office, on the horizontal axis. Over the past seven decades, the two moved positively over time because of an unobserved common factor, the stance of monetary policy. When the Fed is accommodative to push actual GDP above its potential level, corporate profits grow strongly and their future value is discounted by market interest rates that have been pulled down by Fed action. As a result, equity values are high relative to income. Conversely, when the Fed tightens, it pulls actual GDP below its potential, corporate profits suffer, and the future stream of profits is discounted at higher market interest rates. Thus, equity values are relatively low.

This positive relationship was obeyed over the past two years as well (the light blue dots), albeit from valuations levitated higher by the Fed’s keeping its policy rate at the zero lower bound and through unconventional accommodation. If the Fed is determined to return inflation closer to its goal, then we feel it must move the economy to the left part of this chart, where output runs below its potential, and end unconventional support to markets. This movement down and back to the fitted line implies significantly lower stock prices relative to current levels.

This material has been provided for informational purposes only and should not be construed as investment advice or a recommendation of any particular investment product, strategy, investment manager or account arrangement, and should not serve as a primary basis for investment decisions. Prospective investors should consult a legal, tax or financial professional in order to determine whether any investment product, strategy or service is appropriate for their particular circumstances. This document may not be used for the purpose of an offer or solicitation in any jurisdiction or in any circumstances in which such offer or solicitation is unlawful or not authorized. Views expressed are those of the author stated and do not reflect views of other managers or the firm overall. Views are current as of the date of this publication and subject to change. This information may contain projections or other forward-looking statements regarding future events, targets or expectations, and is only current as of the date indicated. There is no assurance that such events or expectations will be achieved, and actual results may be significantly different from that shown here. The information is based on current market conditions, which will fluctuate and may be superseded by subsequent market events or for other reasons. References to specific securities, asset classes and financial markets are for illustrative purposes only and are not intended to be, and should not be, interpreted as recommendations. Charts are provided for illustrative purposes and are not indicative of the past or future performance of any BNY Mellon product. Some information contained herein has been obtained from third party sources that are believed to be reliable, but the information has not been independently verified. No part of this material may be reproduced in any form, or referred to in any other publication, without express written permission.

Mellon Investments Corporation (MIC) is a registered investment adviser and subsidiary of The Bank of New York Mellon Corporation (BNY Mellon). MIC is composed of two divisions: Mellon, which specializes in index management, and Dreyfus, which specializes in cash management and short duration strategies. Dreyfus is also a division of BNY Mellon Investment Adviser, Inc. (BNYMIA), a registered investment adviser.